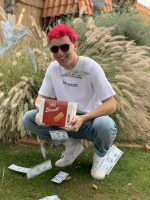 During My First Year: Over spring break, my girlfriend and I went to New York City. We were walking toward Battery Park when a man approached us and asked if we were interested in buying tickets for a boat tour of the Statue of Liberty. I have a notorious inability to say no, so I bought two tickets. He directed us to walk a couple of blocks down and find a woman in a red polo shirt. When we located her, she told us to get on a shuttle, which drove us fifteen minutes away to an abandoned alleyway. We waited in a short line and boarded the boat. Everything seemed normal until EDM music began blasting from the ship’s speakers and a voice came over the intercom to inform passengers that there was an open bar downstairs. People began to drink and dance as we sailed under the Brooklyn Bridge and toward the Statue. At one point, a mosh pit even formed in front of the DJ table. So, that’s the story of how I accidentally rode on a party boat in New York City last year!